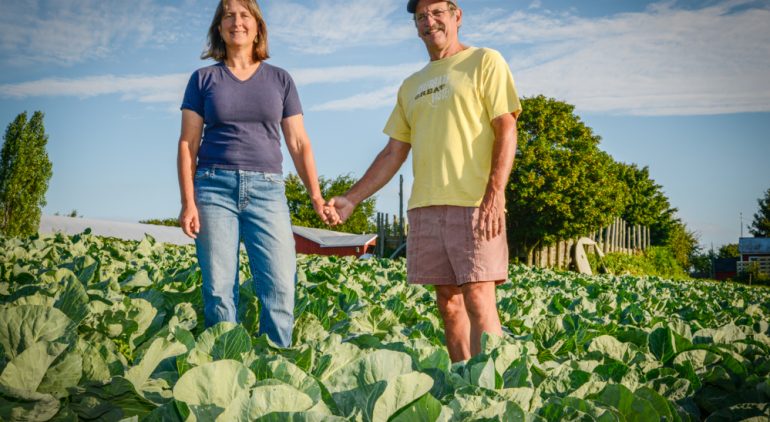 As we continue to celebrate Eat Local Month, we’re casting our Co-op Spotlight on a local, organic farm that has been part of our Co-op family for over 30 years – Golden Russet Farm! We acquire more produce from their farm than from any other farm in Vermont! Member-owners can enjoy 20% off of their abundant array of local, organic veggies and their glorious fresh-cut bouquets from September 17th – 23rd! Read on to learn more about this wonderful farm and the fine folks who work tirelessly to make it such a special place:

Farm owners Will and Judy Stevens have been growing organic vegetables commercially since 1981, having started on a small plot of rented land in Monkton, VT. After growing their business and refining their techniques, all the while learning from other pioneers in the Vermont organic farming community, they determined it was time to expand their operation. In 1984 they purchased a former dairy farm with good soils in the agriculturally-rich town of Shoreham, VT, in the southwestern corner of Addison County—and this land has been home to Golden Russet Farm ever since! Recently their daughter Pauline returned home to the farm making it a true family affair.

In April of 2013 the Stevens put up five free-standing solar panels which provide them with all of their farm and personal electrical energy needs.

Judy and Will have been actively involved in Town affairs through various organizations and boards. Judy served on the Rescue Squad through much of the eighties and has played an important role in the expansion and promotion of Shoreham’s Platt Memorial Library over the last twenty years. Will was elected to the Town Planning Commission in the mid-nineties and eventually chaired it for several years. He has since served on the Select and Zoning Boards and has been elected Town Moderator every year since 2004.

Be sure to visit their blog for a great recipes and tips on using plants as natural dyes!